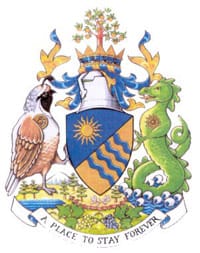 Symbolism of the Arms

The heraldic symbols being presented by The Chief Herald of Canada today are a new expression within a centuries-old art form drawing together elements from the unique natural and historical heritage of Penticton.

The shield symbolizes the City's beautiful setting and fine climate, with the gold sun shining in the sky and across the lakes to create sparkling water across the golden sands of the beaches.

The traditional steel helmet of heraldry is fitted with cloth mantling of blue and gold in the principal colours of the shield. Here the helmet can represent the determination of citizens to uphold the spirit and honour of the City. The lower part of the crest is composed of an open crown of metal in gold a peach tree rising from it. The open crown has a frieze of geese.

The main idea of the crest is to symbolize the importance of the land as the basis for the City's growth and prosperity The specific references are local hills rising to the mountains of the Valley represented in the "peaks" of the coronet The Canada geese are one of several references to the City's rich natural heritage.

The dominant symbol is the single peach tree referring to the historic orchard industry and community spirit of Penticton exemplified in the annual Peach Festival. As well, in many native cultures, a single tree is an important symbol representing the tree of life; both the journey of humans through life and the sustenance received from the plants and the creatures of the earth.

The California quail, a very distinctive bird found locally, emphasizes the City's natural richness while Ogopogo is the famous mythic lake creature. The compartment on which they rest highlights the importance of the beach lands and the two lakes - Okanagan with waves and calmer waters of Skaha. The growing importance of viticulture is also emphasized through the use of the grapes and grape leaves. The historic Kettle Valley Railway is honoured through the steam locomotive wheel on the quail while the S.S. Sicamous is represented by the ship's wheel on Ogopogo.

As chosen by the City "A Place To Stay Forever".

The flag is composed of the elements of the shield in rectangular form.

The combines of the wheel of the SS Sicamous with a golden peach and the waters of the lake.