“Here we are, living in paradise,” says Sinéad Burns, 28, set amidst a lush vineyard on the Naramata Bench, just outside of Penticton. From their Airstream trailer, she and fiancé Eric Welscher-Bilodeau, 32, are enjoy life today, while planning for tomorrow.

Unlike others their age, who may be battling the daily grind in the Lower Mainland, Eric and Sinéad awake to the sound of birds chirping. They sit out in their lawn chairs and soak in the sunny Okanagan view.

This intrepid couple had been planning an overseas travelling adventure to New Zealand when COVID-19 erupted. So, from their temporary home base on the Sunshine Coast, they re-evaluated their plans, signed up for courses at Okanagan College, and bought a 1964 Airstream Overlander.

“We looked at a map of Canada and we thought Penticton would be an ideal place to live. We wanted a change, wanted that feeling of adventure and going somewhere new,” said Eric.

“Penticton feels like a hidden gem,” he added. “After travelling a lot in the world, I was pretty blown away by this landscape and this area. It definitely caught me by surprise. The school drew us here, but once we looked around, we realized this is such an awesome town.”

Wanted: Land to park the Airstream

When the couple moved to Penticton, they didn’t know anyone, so they decided to post an ad on a community Facebook page looking for a place to park their trailer.

It read: “What we’re looking for: A patch of land to rent and live in our retro Airstream in Naramata/Penticton… We’re especially interested in local farms and vineyards as we both have experience and interest in agriculture (especially more regenerative and natural approaches).”

Sinéad had enrolled in a Viticulture Certificate program at Okanagan College and Eric signed up for a Sustainable Construction Management Technology diploma course. Sinéad sought a job at a winery, building on her education and previous working experience.

“It worked out amazingly. We got tons of response,” said Eric. “We probably had at least 10 different serious groups and three-quarters of them were wineries. The people here have been incredibly welcoming.”

“And generous and kind,” added Sinéad.

Both Sinéad and Eric have landed excellent jobs in the fields of their interests.

“All the dreams are coming true,” said Sinéad. 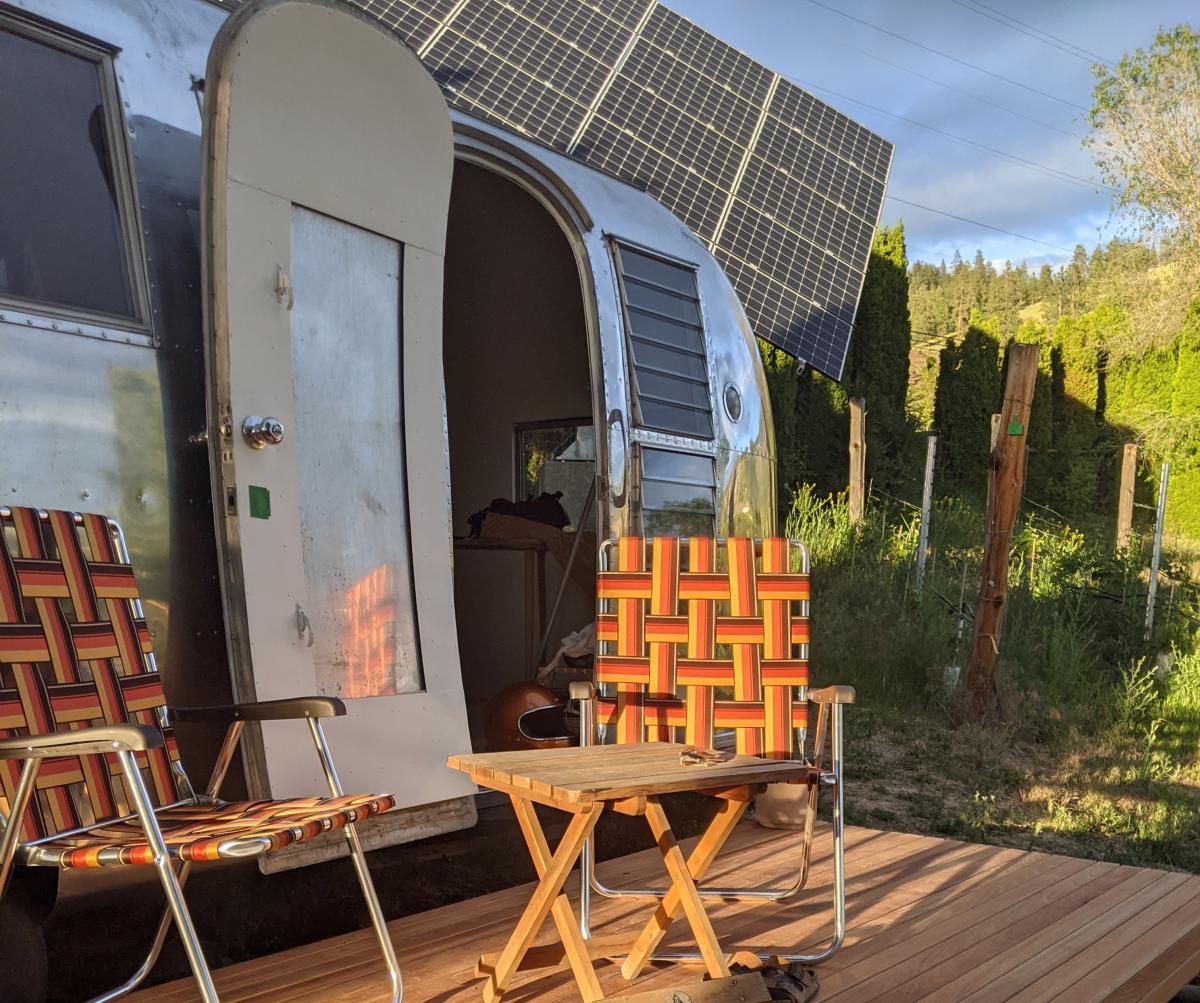 Is it a lifestyle option for anyone?

For young people, the thought of living in a trailer may sound like an amazing adventure. It’s low cost, low-impact on the environment and offers the flexibility of living close to where you work or go to school.

“If you have ever thought about scaling down on how you live, it’s an amazing thing to do,” said Sinéad.

As for Eric, he says the lifestyle not only benefits people who seek an affordable living option, but also to employers throughout the region who are crying out for quality staff.

“It’s hard [for businesses] to find people who have accommodation and who are passionate and interested in doing this work,” said Eric.

“We feel 100% more comfortable in our own space rather than living in someone else’s place temporarily,” he added.

“It’s a luxury we enjoy, having the sunlight and the birds outside the window, rather than living in a basement suite. It requires a lot of research and learning, but I think it’s a way forward.”

It's the Penticton Advantage

What to learn more about the many advantages to living and working in Penticton? Visit StartHerePenticton.com.