Where to try the ultimate cinnamon buns in Penticton

There’s something very irresistible about a gooey, doughy cinnamon roll. Here in Penticton, bakers take their craft very seriously, so we’re blessed with some of the best buns in B.C.

We have done our research to round up this delectable list of places that bake these treats fresh in-house. And it seems that we Pentictonites have a slight obsession for these cinnamony baked goods. While the city has no shortage of incredible cafés, restaurants and bakeries, this Love Local blog focuses on the places that offer the “ultimate” cinnamon buns on a regular basis.

You may want to bookmark this page and work your way down the list. 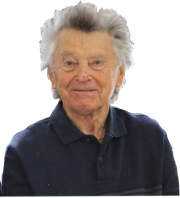 Our journey begins with one of the most well-known bakers in Penticton, Ambrose, who at age 93 has built a loyal following. Each Wednesday morning, people line up (safely distanced) at the Seniors’ Drop-In Centre for this calendar highlight.

“Our wonderful baker, Ambrose, begins the process the day before by prepping all his supplies and then he is able to start the next morning very early – 4 a.m. By 10 a.m., when the first treats come out of the ovens, the delicious smell of cinnamon is wafting through the building,” says Mignonne Wood, president of the Penticton Seniors’ Drop-In Centre Society.

“People are waiting to pay just $2 for the opportunity to gourmandize fresh, hot cinnamon buns. Ambrose has a following and people come from all over Penticton to enjoy his fare.”

Everyone is welcome at the Drop-In Centre, adds Wood. Members, non-members, young and old, families or singles, friends with friends. “We welcome everyone.” 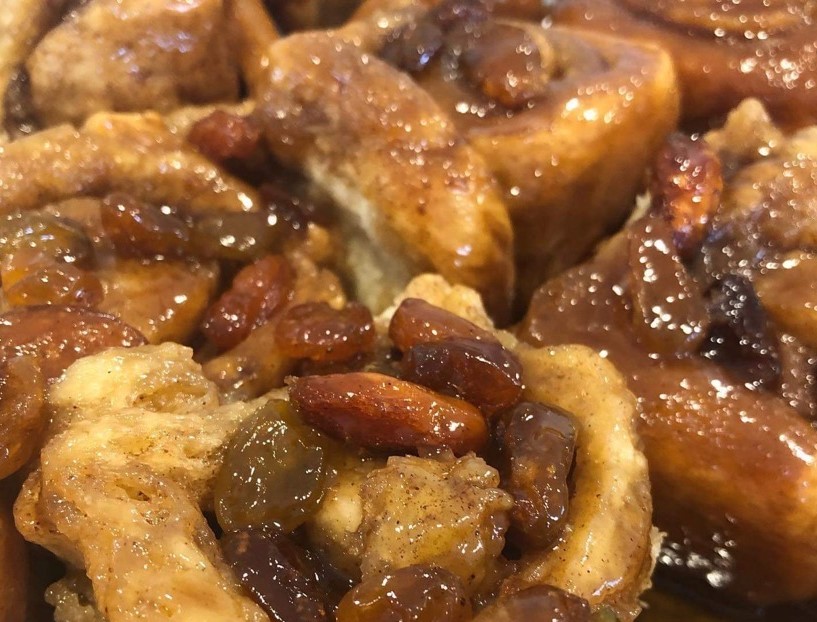 To say that people “like” the cinnamon buns at the Nautical Dog Café would be a huge understatement. The fan base is wildly devoted. And we can see why. Pastry chef Fergy, the owner of this fabulous spot, arrives in the wee hours each morning to make them fresh every day (except Mondays) – among her other much-loved treats.

The specialty ingredients vary, “depending on what the farmer brings in,” she adds. Think walnut/apple, raisin/blueberry, peach (pictured above) or plain (which is just the opposite of plain). They’re usually out of the oven by 11 a.m., so you may want to time your visit accordingly.

“I don’t know what it is about cinnamon buns, but when we run out, trouble follows,” Fergy jokes. “Someone bought the last six in front of somebody who needed one very badly. I ended up making another batch and delivering them.”

So, we asked the pastry chef, should we call them cinnamon buns? Or rolls?

“Doesn’t matter! Whatever name makes you feel cozier,” she replied. “They taste like someone who loves you is hugging you. Is that more bun than roll? It’s up for debate.”

This café boasts a sensational location at the harbour along Skaha Beach, with tables widely spaced, and a glass display case with fresh baking. 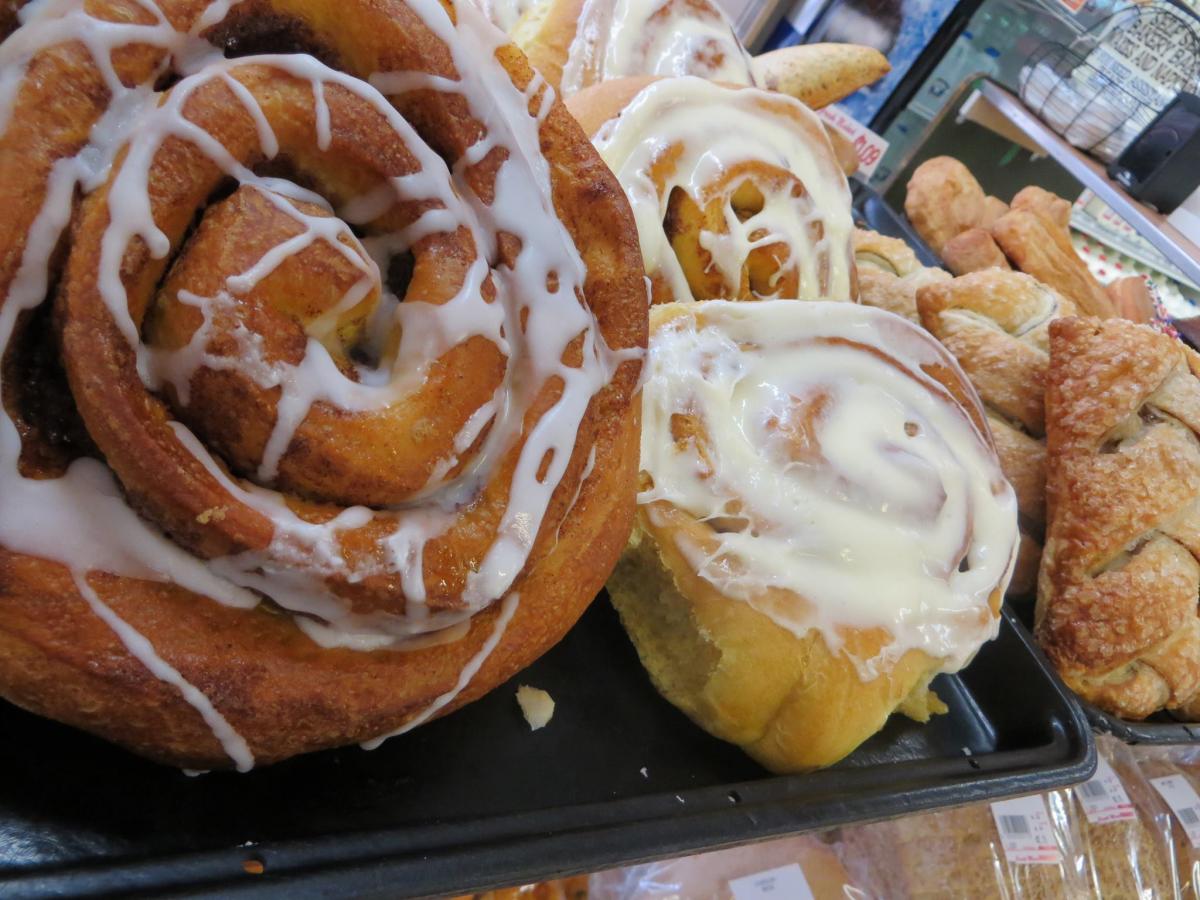 Also on the south end of the city near Skaha Lake, the South Main Market offers a welcoming surprise when you walk through the doors. Tucked near the back of the shop is a hidden gem of a bakery, where everything is baked fresh in-house.

Their cinnamon buns are to die for, of course, and while you’re there, you may want to stock up on bread and other delights. 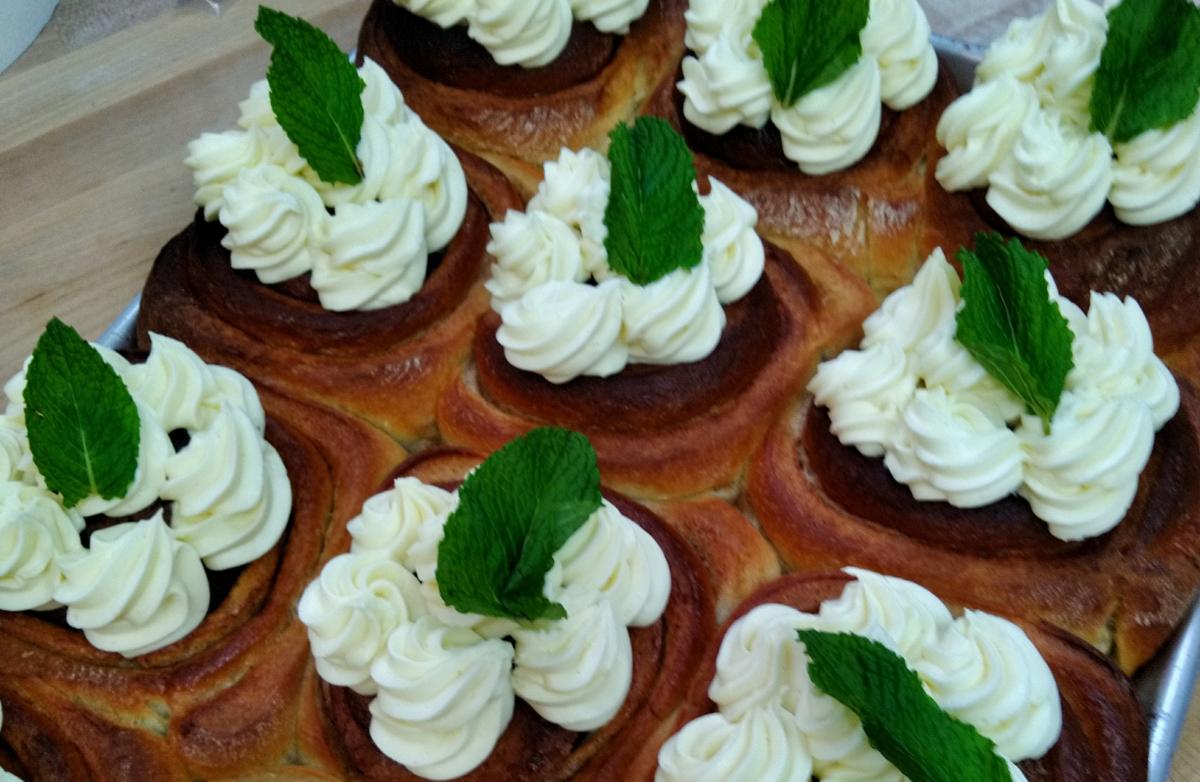 Open the door to reveal a super cute bakery with eclectic décor and happy customers chatting away at tables safely spaced apart. The staff are cheerful and welcoming – and it’s no surprise this much-loved spot on Main Street earns rave reviews.

Petrasek Artisan Bakery, as the name implies, is an artisan European bakery that prides itself on making everything from scratch – and filling the street with delicious aromas. Recipes are passed down and handcrafted, using local ingredients wherever possible to support the community.

“We use a traditional recipe with good simple ingredients, and our use of a brioche dough helps to provide a much richer and more delicious product than the white bread dough a lot of bakeries use to save on time and money,” says co-owner Jan Petrasek. “We also use a cream cheese frosting on top to add an extra dimension of flavour and texture to it.

Their cinnamon buns are so good, the server behind the counter warned that they sell fast. Super fast, in fact. You may even want to phone ahead to place your order. Noted! 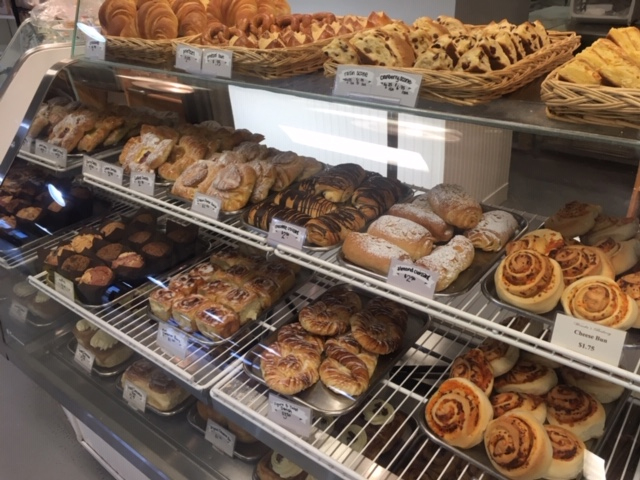 A local institution, no Penticton blog about great baking would be complete without a mention of Woudas Bakery. Their display case offers a huge selection of baked goods, with cinnamon buns offering a pillowy dough topped with a light drizzling of icing. 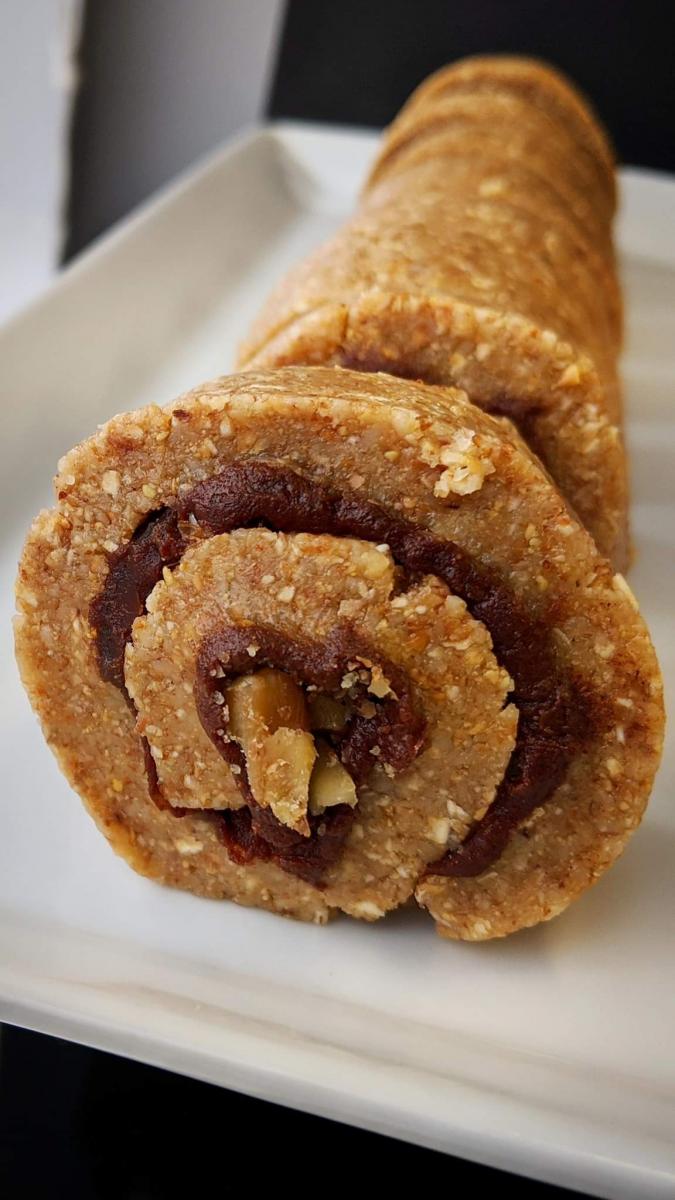 For the gluten free or health conscious, Gratify on Main Street has an option that will blow your mind. Their cinnamon roll is packed full of cinnamon flavour, with a chewy texture that offers a satisfying bite.

“The cinnamon roll at Gratify is unlike anything else out there for a few reasons,” says co-owner Ryan Oickle. “First, it’s raw, and made to be consumed that way. Instead of a bread-like wheat flour dough, Gratify combines ground almonds, oats, flax seeds and maple syrup for a gooey, yet chewy, crust. Finally, the date-based cinnamon filling is studded with crushed walnuts, making this entire delicacy both plant-based, gluten free, and arguably the most nutritious sweet treat out there."

This recipe is also a tried-and-true hit with the kids. 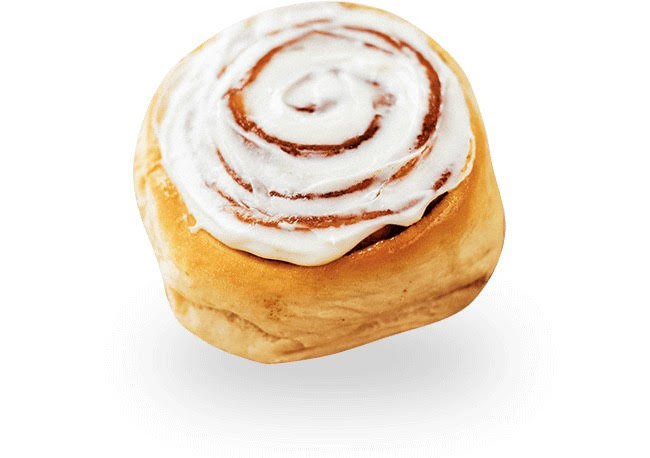 At COBS Bread, their cinnamon buns are fluffy and soft, with a healthy dollop of cream cheese icing on top. They’re made with real butter and are satisfyingly sticky. Unwind the spirals of silky dough to find that coveted centre coated in a gooey cinnamon sugar glaze.

Your closest Cobs is at Riverside Village and the branch is locally owned. They also make it a monthly goal to give back to the community in many ways, to non-profits and through supporting local initiatives. They also donate every single evening by donating “every last slice” to our schools and more.

This blog features locally owned small businesses that offer freshly baked cinnamon rolls on a regular basis. There are also many more wonderful places throughout Penticton that offer in-store baking, some of which offer cinnamon buns on occasion, including The Bench Market and Meeples & Milkshakes Board Game Café’s amazing sticky buns.

Did we miss your favourite spot? Tell us about it! Share on social media tagging #lovelocalpenticton or email economicdevelopment@penticton.ca to be added to our list.