Bike not registered with Project 529? Here's where it ends up in Penticton 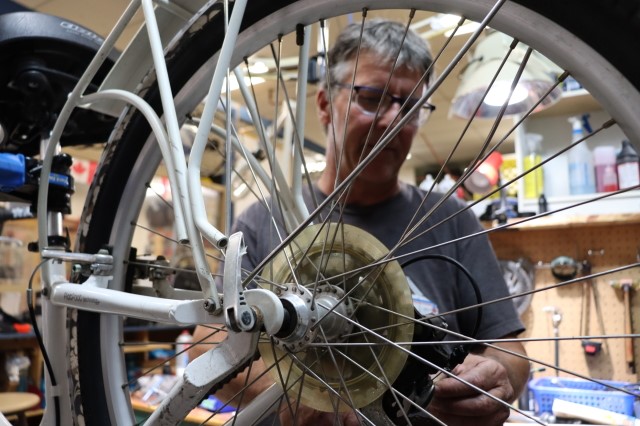 The slightly yellowed newspaper article, neatly trimmed, placed inside a black frame and hanging on the hall wall, tells the beginning of the story. It was September 21, 1984 and the City of Penticton had handed over the bike lost-and-found duties to the then-Penticton Training Centre.

But that’s not the end of the story. Now 40 years later, the relationship between the City and The Bike Shop, run by the now-Penticton and District Society for Community Living, continues to operate and refurbish bicycles.

The Bike Shop on Industrial Avenue is a thriving hub of activity, overseen by Francois Paquet and assisted by four clients from the PDSCL, who are given the opportunity to learn a skill, put them into practice and get paid for them.

“Most of our bikes come in by donation, you know kids have left home – might have been 15 years ago now – and people are cleaning out their garages and the bikes are still sitting around,” says Paquet, who has worked for the PDSCL for three years after a lifetime in the bicycle business, including operating his own shop in Ucluelet. “And we have older people who are upgrading, buying electric bikes, and so they donate to us.”

If in good shape, they are refreshed and put up for sale; bikes beyond repair are stripped down for parts, which can be sold and then the remaining bits are recycled, right down to the tires.

On Monday mornings, there are usually a good number of bikes left outside the front door for Paquet and his team to go through and assess the condition. This is also the point where undocumented bikes get put into isolation for 90 days.

Donations, though, aren’t the only source of inventory for Paquet and his crew. The City of Penticton Bylaw Services also provide more stock through bikes they haven’t been able to return to owners.

The first step is to make sure you register your bike with Project 529, if you haven’t already.

“We encourage everyone to sign up with Project 529 and register all of their bikes so we can return them if we come across them,” says Bylaw Services manager Tina Mercier. “This is very helpful tool that works in allowing us to recover and return bikes.”

But if you haven’t registered your bike yet and it is stolen, you should report it stolen immediately to RCMP so it can be placed in the Canadian Police Information Centre (CPIC) database.

Bylaw Services run recovered bikes through CPIC and if no match is found, they hold on to the bike for 30 days.

If you have lost your bike or it is stolen and think Bylaw Services may have it, you can call 250-490-2440 and, once you’ve provided a thorough description of your property, arrangements will be made to return it.

The City has limited capacity to store bikes, so Bylaw Services holds them for 30 days and then turns them over the PDSCL.